I’m coming up on four years living in Columbus, FIVE in Ohio… (where does the time go?!), and if you know me at all, you know I’ve spent a lot of time in these four years complaining about living in Columbus. Some of my complaints are justified. The winters are long, and yes, they are absolutely longer than where I’m from, which is about ten degrees warmer year round and I would say enjoys about six more weeks of nice weather during the warm seasons. The overall social attitude is different. I come from a place where you’d wave at your arch nemesis to say thanks if they let you out in traffic. I come from a place where your arch nemesis will let you out in traffic, haha. The landscape is a lot more concrete and a lot less flowing rivers and rolling hills. To sum it up, Columbus is just different than what I’m used to.

However, last night I got to thinking. When I reflect on the past five years I’ve spent in Cincinnati and Columbus, respectively, I have experienced so many wonderful things, just minutes from my house, that I would’ve had no access to where I’m from. So, for all of you Ohio lovers out there, the following is an appreciation post!

Major League Baseball. Listen, I’m not a sports fan. We’re all clear on that. But, something about Great American Ball Park puts me in a Geena Davis circa A League of Their Own mindset. Baseball is nostalgic, and American. Also, Joey Votto tho.

Professional soccer… for now. #savethecrew We have really enjoyed tailgating and going to soccer games! I have to say, this is one of the few sports that I actually find myself invested in watching and I really hope we can do something to keep them here!

A giant, flourishing, safe downtown to explore. From North Market (where I saw Samantha freaking Brown killing time for a delayed flight!!) to Newport Music Hall, and all the cool shops and eateries in between, wandering around downtown Columbus is one of my favorite things to do here. 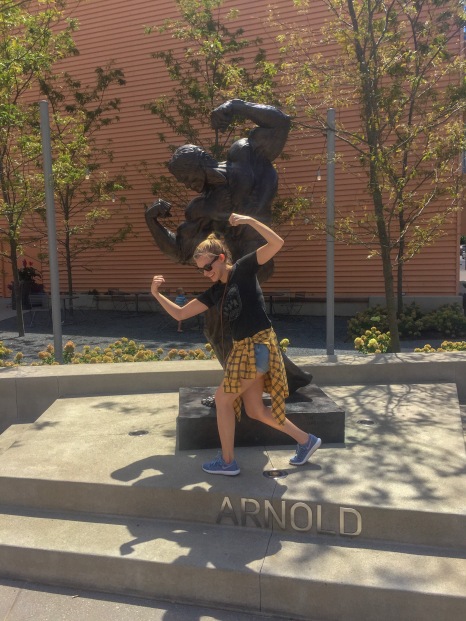 The. Music. Scene. Is. Lit. In the past seven days, my friends, I have seen both Taylor Swift and Hanson and the best part is, having access to that kind of talent is not rare around here! I’ve basically seen every musician my ears have desired to see since we moved here, and I don’t have to plan a road trip or take time off of work to make it happen! It’s crazy.

Last night, we saw Hanson at Columbus Commons with the orchestra (and yes I cried hard during MmmBop because I was bucket listing and it was emotional), and it was so cool. You can actually even bring your own food and alcohol. We’ll definitely be attending more Picnic With The Pops events in the coming years!

Shopping. Something my friends in Columbus always find unbelievable is that I have been shopping here for years. Easton was my West Virginia hometown’s back to school shopping destination! And I was usually lucky enough to come a time or two more throughout the year with my parents or a friend. My mom always told me that the novelty of Easton would wear off once I’d been here for a while, but Kyle and I hit up Easton weekly for browsing and playing Pokemon Go (lolololol).

So yeah, don’t get it twisted, West Virginia is my soulmate, but it turns out that you can love more than one state. You can have more than one hometown. Ohio really is for lovers!

xoxo O – H – I tricked ya! Still a Mountaineer fan!

2 thoughts on “Ohio is for Lovers (of Ohio)”